The magnificent winning streak lifted him up to fourth place on the January 2007 FIDE rating list. 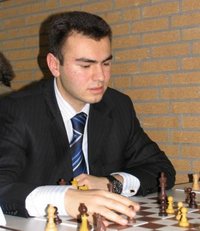 Shakhriyar Mamedyarov comes from a sports family. His sisters are WGM and WIM respectively, and his father is a former weight lifting champion. Born on April 12, 1985, Mamedyarov first attracted public attention after winning the 2002 European U18 championship with a fantastic score 10/11. A year later he took his first World U20 championship.

Playing mostly in open tournaments and national team events, Shakhriyar patiently built his rating towards the 2700 mark. He finished 3rd in Lausanne 2004 and Corus-B 2005 and took another World U20 championship on 2005 with a performance above 2900! His tactical and unorthodox style proved to be deadly for “regular” Grandmasters

2006 was the year of Shakhriyar Mamedyarov. He didn’t start too well, finishing in the mid table at Corus-A, where he replaced Kramnik on a short notice. But then he won Moscow Aeroflot, Reykjavik Open, Baku Open, the exceptionally strong rapid Villa Cañada de Calatrava and the Mainz Open which qualified him for the main knockout tournament this year.

In the closed high rated events, Mamedyarov finished fourth in the 18th category Foros Aerosvit and won the 20th category Hoogeven Essent ahead of Topalov and Polgar. The magnificent season saw him reaching fourth place on the January 2007 FIDE rating list. After short period of inactivity, he is now rated 7th in the World. Hungry for success, Shakhriyar is one of the main contenders for winning the third Mtel Masters.