The second super GM of India 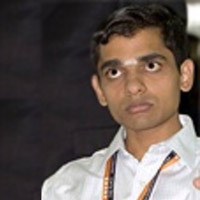 Krishnan Sasikiran was the second Indian player to break the magical 2700 ELO mark and enter the super GM club. He did that on the January 2007 FIDE rating list. After years of playing lower rated and open tournaments, Mtel Masters organizers have finally awarded him with an invitation to face the elite.

Sasikiran was born on January 7th 1981 in Chennai, in the state of Tamil-Nadu. Don’t be confused with Indian naming, Sasikiran is his first name and Krishnan is actually the first name of his father. Sasikiran started playing chess at the age of 9 and earned the Grandmaster title at the age of 19. His coach is his father Krishnan, himself strong player, who was also the first coach of IM Sundararajan Kidambi.

In the years before he became a Grandmaster, Sasikiran was Indian and Commonwealth U18 champion and twice British U21 champion. He also participated in the Indian National team at the Elista 1998 Olympiad where he scored 8.5/11 on the 4th board almost earning medal for the individual result.

His first GM norm came at the 1998 British Open in Torquay where he finished 6th. Wins at Andorra Open and Balaguer Open (Spain) and a third place in Benasque Open 1998 were to follow. The next year he won his first Indian National “A” Championship and the Asian Junior Championship.

The year 2000 was simply fantastic for Sasikiran. He earned his 2nd GM norm at the Asian Championship in Udaipur and 3rd GM norm at the Goodricke International Open in Calcutta. He wasn’t able to retain the Indian National title as he finished 2nd, but he took the Commonwealth Championship few months earlier. Finally, he won the 11th category Pentamedia tournament in his birth-town Chennai.

Sasikiran often participates in practice games with experienced players. Here is how he explains the benefits: “It’s one thing that I love to do, and have been doing it regularly. It was basically the idea of my father and trainer, Mr Krishnan, which caught upon me. I used to train with Chennai players A L Kasi, A Sankar, S Kidambi and M J Ismail. Quite recently I’ve been doing it with GM Dibyendu Barua and I found it extremely useful. My vision for tactics improved after training with Barua.”

Next year started with Sasikiran taking the trophy at the 76th Hastings International Chess Congress, the oldest annual chess tournament. Soon afterwards came a 1st place at the Asian Zonal Championship in Colombo and again a 2nd place at the Indian Championship. Before starting to receive invitations for the European closed tournaments, he had to win the AICF Golden Jubilee, the 77th Hastings International Chess Congress, the Asian International Open and two consecutive Indian Championships in 2002 and 2003. A successful excursion to Denmark meant winning the 15th category Nord Sea Cup and Politiken Cup in 2003. Later he also took the 13th category Sigeman tournament.

Sasikiran has attended several training camps organized for Indian Grandmasters by Vishy Anand. He was delighted with the experience: “The last time when Anand was here, I had an opportunity to work with him on a one-to-one basis. We worked on some specific positions for a few days, and analysed them. That was when I really saw him calculate positions.”

In 2006 he won La Roche sur Yon and then lead India to the team gold in the first ever chess competition at the Asian Games, held in Doha. He scored a fantastic 8.0/9 on the first board and reached the heights of 2700 ELO points: “This is a dream come true, really. Something I have been dreaming about for the last four years. And I was expecting to make it in this list.” he said, and added “Doha was an unforgettable experience in many ways”.

The Mtel Masters will be Sasikiran’s first 20th category tournament and a chance to shine. So far he drew Topalov once, lost one game to Michael Adams and scored +1 =2 -2 against Liviu-Dieter Nisipeanu. He has never played Kamsky or Mamedyarov before.