The US number one player 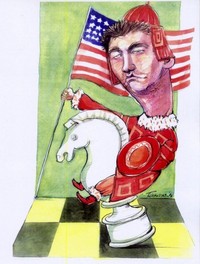 The American Grandmaster Gata Kamsky is traveling to Elista, Russia on May 25th to play candidate matches in his second run for the world chess championship. The previous one ended with Anatoly Karpov defending his title in a match against Kamsky back in 1996 at the very same place of Elista. Maybe the Kalmyk steppe will bring him better luck this time. We’ll keep you updated. In the meantime, here are few facts from his rich biography.

Gata Kamsky was born on June 2nd, 1974 in Novokuznetsk, Russia. Before he turned 15, he had won the Soviet under-20 championship twice, which was a remarkable achievement having in mind the competition of the older and more experienced players. After playing the New York Open in 1989, he immigrated to the United States together with his father Rustam. Rustam stated that Garry Kasparov was obstructing Gata’s chess development in Soviet Union.

Gata played his first super-tournament in Tilburg 1990 and won it together with Vassily Ivanchuk. The closing ceremony was amusing. Cheerleaders danced around the winners and confetti were flying while the loudspeakers were blasting the song “You’re sixteen”, reffering to the age of the young talent. This result finally brought him Grandmaster title, which he did not have until then despite his 2650 rating.

The Alekhine Memorial 1992 (category 18) saw Gata on 3rd place. Later he won Buenos Aires. In 1993, he qualified simultaneously for FIDE’s championship cycle by taking 2nd place at Biel Interzonal and for PCA (Professional Chess Association) Candidates by sharing 3rd in Groningen. His continuous run in both the FIDE and the PCA championship cycles is one of the most impressive streaks of winning matches ever, second only to Fischer’s.

Interesting series of matches started when Gata faced Dutch GM Paul Van der Sterren in the FIDE Candidates Matches in Wijk aan Zee in January 1994 and won 4.5-2.5. The next step was much harder, Kamsky was paired to play Vishy Anand on his field in Sanghi Nagar, India. Anand took an early lead 3.5-1.5 and just when everyone expected to see Kamsky eliminated, he pulled a miraculous comeback to bring the match to a tie 4-4. He then shocked Anand 2-0 in the tiebreak and progressed to the semi-finals.

Sanghi Nagar was also site of the next round when Gata Kamsky convincingly beat Valery Salov 5.5-1.5 to qualify for the FIDE championship final match against Anatoly Karpov. 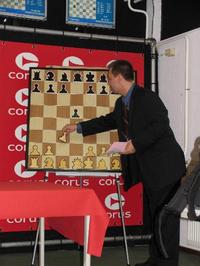 Kamsky is the leading player of the USCF

Parallely, Kamsky competed in PCA championship cycle. It started off with a match against Vladimir Kramnik in New York in June 1994, which he won 4.5-1.5. In the semi-finals he played Nigel Short in Linares, Spain. Kamsky crushed him in first three games and won the match 5.5-1.5. He went confidently into the finals, where he faced Vishvanatan Anand yet again.

Anand was patiently waiting for revenge after his loss to Kamsky in Sanghi Nagar. Still, the final match in Las Palmas started with Vishy Anand surprisingly losing the first game on time when he had a winning position. Fierce battles in Ruy Lopez and Gruenfeld emerged in the following games, with Anand coming on the top 6.5-4.5.

During the breaks between matches Gata played in a couple of other tournaments. He won Las Palmas 1994 ahead of Karpov and Topalov and also Dos Hermanas 1995 after a fantastic finish when he beat direct competitors Karpov and Adams in the last two rounds.

The final match for the FIDE World Championship was against Anatoly Karpov in the Kalmyk capital Elista. Following his 7.5-10.5 defeat, Kamsky announced that he “quits chess after achieving his maximum” and that “he wants to become a doctor”. In an interview given at Khanty Mansiysk 10 years later, he said: “To tell the truth, I don’t like recollecting that time. There were too many political intrigues around the Match with Karpov. It was one of the reasons why I made up my mind to leave chess. I prefer not to talk about this issue. Recently, FIDE is making efforts, but it is advisable to avoid the situations when the regulations are changed after the cycle start.”

The next years of Gata’s life are different. Kamsky graduated from Brooklyn College in 1999. The same year he made a short appearance at the FIDE knockout world championship in Las Vegas. There, he won the first game of the mini match vs Alexander Khalifman, but lost the second one and the tiebreaker (Khalifman went on to win the tournament becoming first FIDE KO champion). Gata then attended medical school, but later switched to law where he earned a degree. In a recent interview, he said he is still planning law practice once he achieves his goals in chess.

Kamsky was absent for the next five years and then suddenly started to play rapid weekenders at the Marshall Chess Club in New York. June 15, 2004 is the date of his big comeback. His chess looked rusty, but Gata gradually improved his form to tie 2nd place at 2005 Americas Continental Championship, which brought him to the 2005 World Chess Cup in Khanty Mansiysk. The ruthless knockout format wasn’t a distraction for Gata to shine and qualify for the 2007 World Championship Candidates Matches to be held next month in Elista. The four winners will qualify for the World Chess Championship Tournament 2007 that will take place in Mexico in September 2007. The first barrier to his second quest for the world championship will be Etienne Bacrot of France. Gata is confident: “At 32, I feel that I am in my prime and up to the task of becoming the next American World Chess Champion.” 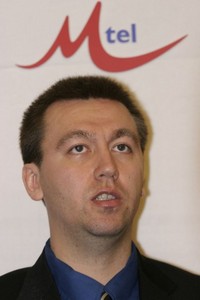 Kamsky was a step away from winning Mtel 2006

After the World Chess Cup, Kamsky had another fantastic event in Sofia in May 2006, where he finished 2nd after leading most of the M-Tel Masters tournament. Then the World Champion Veselin Topalov had to pull fantastic winning streak in last few rounds to grab the trophy. Only few days later, Kamsky led the US national team to win bronze medal at the 37th Chess Olympiad in Turin. On June 2006, he won the rapid Mayor’s Cup, and on July 2006, he tied first place at the World Open in Philadelphia.

As part of his preparation for the Mtel Masters 2007 tournament, Gata Kamsky won the Foxwoods Open 2007 by defeating GM Izoria in the blitz playoff.

The 2007 Mtel Masters was fantastic tournament with a very close field. Kamsky finished first half on -2, but managed to recover by beating Sasikiran and Mamedyarov, and even fought for the first place. Last round draw held him on tied 2-5. place. Only few days later, Candidate Matches have started in Elista. Clearly, Mtel Masters was nice warm up for Gata as he smashed higher rated Etienne Bacrot 3.5-0.5 to progress into the next round.