And he is not a bad player at all as he is also a FIDE Master who has represented his country in 4 Olympiads starting with Moscow 1994 and ending in Calvia Spain 2004.

FM, IA, IO Genden was born 21 October 1961 in Khovd in Western Mongolia, the eldest of 8 children born to his doctor parents. He too is also Dr Genden but only because he has a Ph D. in Economics!

Like so many Genden learned the moves early from his father, an avid chessplayer, but only became really interested when 16. But this late start has resulted in a love affair has now continued for over 30 years.

Genden is fluent in German, having spend 10 years there, beginning as a student from 1979-1985 where he completed the equivalent of a Masters degree in Software Engineering. 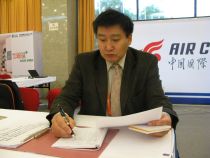 Returning to Mongolia he found he had to organise events to play in them and threw himself into this work with passion, even writing his own swiss pairing software until he found there were programs in the market he could use. And he has done well as a trainer too, with many of his students now the top players in Mongolia (including GM Sharavroj and IM Ganbold).

Married with 2 children, he is today a consultant-researcher in the fields of ICT and Management Science and Economics after quitting the rat race in 2005 where he had held many senior positions in R&D firms including a long stint in Datacom.

Genden first got international recognition as an organiser with the World Universities Championships held in Ulan Bator, Mongolia where he was the Chief Arbiter and since then he has been involved in many high profile events.

But surprisingly the German speaking and extremely experienced International Arbiter will not be going to the Dresden Olympiad as his application to be a Match Arbiter was somehow not accepted!

Since 1989 he has served on the Board of the Mongolian Chess Federation and since 1990 been their FIDE Delegate. From 2002-2006 he was also a member of the FIDE Executive Board.