in his own words

My name is David Navara, I am 23 years old and my current rating (2672) is the lowest among the participants. I am not used to such a role, but if I am in a good form, I can finish somewhere in the middle or even slightly better. On the other hand, being in a poor form I can easily finish last. I did not participate in many such difficult tournaments, but I usually play better against stronger opposition, avoiding excessive risk.

I started to play chess at the age of 6. It turned out gradually that I was very talented. But I had a good support as well. Grandmaster Ludek Pachman trained me in a short period around 1995, but my most important trainers were IM Josef Pribyl and especially GM Vlastimil Jansa. I managed to finish third at a World Junior Championship in B12 category in Cannes (FRA), 1997 an second in B14 category in Oropesa del Mar (ESP), 1998. At the age of 15 I succeeded in the European U20 championship in Avilés (ESP) and World U18 championship in Oropesa del Mar, but did not get a medal. 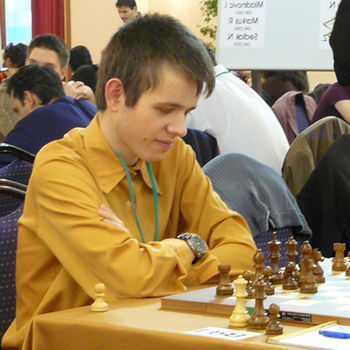 My worst recent result is 4.5/13 in the German Bundesliga 2006/2007, but I achieved several other bad results recently. I probably played my best chess from August 2005 to July 2006, but then my results deteriorated again. Therefore now I am the weakest participant of the Grand Prix Tournament in Baku.

I live in Prague. I am a student, even though not a very good one. I study logic, but I am more interested in sociology. My father is an university teacher and scientist (mathematician), my mother is a dentist. I have one younger brother and no sister. I am trying not to ignore the outside world, but I do not have any major hobby except for chess and sociology. Except for Czech, I can speak English and Russian more or less fluently. My knowledge of German is not very good.

With the help of Viktor Novotný from Novoborský Chess Club